Looks like you’re moving on up, agent.  Faction Ranking missions are now available – are you up to the challenge?

Once you’re Level 50, are finished with at least the entirely of the Tokyo storyline, and have an Item Power of at least 250, a new series of tasks become available, allowing you to increase your standing within your Faction!  As they say, nothing of value comes for free: You have to show some backbone and commitment – you have to prove yourself!

Each Faction Ranking mission has a minimum Item Power requirement, beginning with Into Darkness at IP 250.  Other ranking missions will require additional Item Power before you may accept them.  To accept, look for the Paragon Activity Boards in Agartha (they’re the red ones).

For example, here’s what it looks like for a character at 500 IP for Into Darkness: 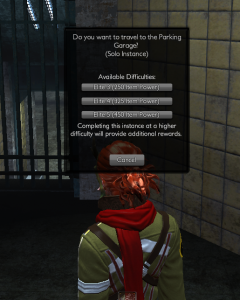 In addition to Faction Ranking missions, those agents infiltrating New Dawn in South Africa may access one new Sabotage mission titled “Public Enemy Number One”. Who’s been keeping an eye on you within the compound? We suppose you’ll want an answer.  If you’ve completed “Things That Go Bump in the Night”, return to your quarters and look for a little somethin’ someone left for you.

With the inclusion of this mission, the meta-achievement “Land of the Dawn”, along with its fashionable reward, may now be obtained.